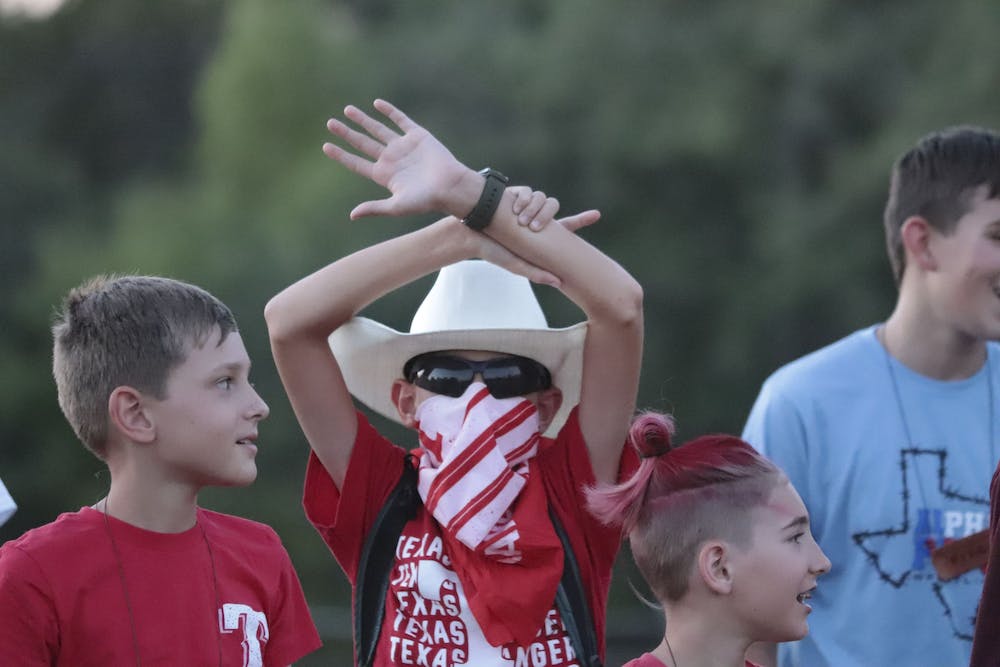 We kicked off the first day of Texas summer camp with costumed staff singing camp songs at our gates as families dropped off their boy and girl campers. Campers got settled into their cabins, met their counselors, and reunited with old friends – including our beloved summer camp dogs who were so happy to see a crowd of smiling faces again!

After dinner and our first flagpole ceremony of the term, we began our traditional Opening Night Team Initiation Ceremony. At Camp Balcones Springs, we have many camp traditions, stories, and legends that we pass onto campers and counselors year after year. However, perhaps the biggest part of CBS camp lore are our Team Comp Camp Teams. All campers and staff who walk through the Camp Balcones Springs gates are initiated into one of four teams – boy campers to either the Texas Rangers or Rough Riders, and girl campers to the Lonestars or Silver Spurs. The Texas Rangers wear red, shout the famous “Five Bullets Baby!” cheer, and are brothers with the Lonestars, who wear green and have a litany of cheers, including the famous “Lone Star Love!” yell. The Rough Riders wear blue and throw up the notorious “Tatonka” hand gesture that resembles the horns of a bull. The Silver Spurs are the Rough Riders’ sister team. The Spurs sport purple and, like the Lonestars, possess an impressive library of cheers, including the always intimidating “ching ching ching” – whispered softly to mimic the sound of spurs clashing against boots on horseback.

During Team Initiation, campers gather together in the GridIron (covered pavilion) to hear the legend of how the Camp Teams began. In the distance, campers watch as the team legends – four figures dressed in western garb – travel across the field silently on horseback. Team sponsors – counselors who act as team mascots for the term – line up in front of the campers as the story is told. Each new camper is given a paper bag with their name on it. Inside these bags, a slip of paper revealing the camper’s new team is enclosed. Once the narrator finishes, old campers are instructed to go join their sponsors on the field. Now, only new campers remain in the GridIron. New campers are then told to open their bags, read their slip of paper, and go join their new teams!

What happens next is a bit of a secret – sponsors and counselors lead old and new campers alike to their respective team hideouts – top secret locations across camp where new campers are initiated into their teams by learning new cheers, secret handshakes, and each team’s code of ethics and values.

This year, 80 new campers were initiated into all four teams! Campers will compete alongside their teams every day in Team Comp tournaments and games, all leading up to our infamous CBS Amazing Race relay event at the end of the term. One set of teams (either the Texas Rangers & Lonestars or Rough Riders & Silver Spurs) is declared the overall winner for each term based on how many points and wins they earn throughout the session. It’s not just a yearly challenge, though – campers will belong to the same camp team for every year they return to CBS going forward!

With such a fun-filled first day already in the books, we can’t wait to see what else is in store for Term 2. Be sure to check Waldo and our summer camp Instagram page for more photos and updates, and we will have a recap of the first full day of camp tomorrow (Tuesday)!